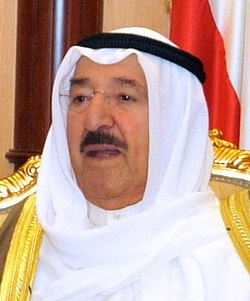 HH Sheikh Sabah Al-Sabah is the fifth Emir of Kuwait and the Commander of the Military of Kuwait. He had previously been Foreign Minister for 40 years, from 1963 to 2003, making him one of the longest-serving foreign ministers in the world. During his role as Foreign Minister, he restored Kuwaiti international relations after the Gulf War as well as restoring the country after the Iraqi invasion.

During his reign as Emir of Kuwait, he instituted one of the strongest press freedom laws in the Arab world. He also sponsored the 27-article UN resolution 2178 that focuses on eliminating da’ish and related militants.