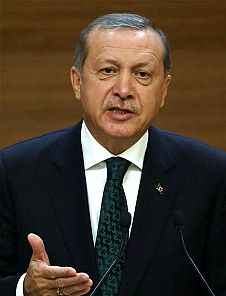 6
Recep Tayyip Erdogan
President of the Republic of Turkey

HE Recep Tayyip Erdogan was the Prime Minister of Turkey for 11 years, winning three consecutive elec- tions with a majority (2002, 2007 and 2011), before becoming Turkey’s first popularly-elected president in August 2014 and then securing a second-term in the 2018 election. During his terms, Turkey has seen unprecedented economic growth, constitutional re- form, and a re-emergence as a major global power.

President: Erdogan secured 52.5% of the vote in the 2018 Presidential election (electoral turnout was 86%), and thereby avoided a second round runoff. This was a continuation of his remarkable popularity and success at the ballot box over the past two decades. During his time as president he has pushed for more powers for his post, a move not welcomed by all, and criticised by many as signs of wanting excessive power. He has lost support from key members of his own party, and been criticized for cracking down on the media.

Failed Coup Ramifications: The failed coup of July 15 2017, which led to about 200 deaths, has led to huge ramifications as Erdogan looks to root out all those involved. He has squarely laid the blame of orchestrating the coup on Fethullah Gulen, and has led an all-out attack on Gulen’s organisations and supporters. There has been a major crackdown on many sectors with about 160,000 civil servants being dismissed in various state institutions, with over half from the education sector. Also, 50,000 people remain in detention with this number continually rising as authorities press ahead with regular raids.

Global Relations: Under Erdogan, Turkey has focused on building stronger relations with all of its seven land-contiguous neighbours (especially Greece) and also all of those countries bordering the Black Sea (an important trading hub and a geopolitically significant area). In Africa, it has opened up over twenty new embassies and consulates, and when Somalia suffered from a crippling famine and drought in 2011, Erdogan not only gave aid, but also became the first leader from outside Africa to visit Somalia in nearly two decades. While Turkey has about 45% of its foreign trade with European countries, it is developing strong trade relations with other regions and attracting investment from all over the world.

Bait-and-Switch? In July 2015 Turkey finally declared war on da’ish after an agreement with the US. It immediately proceeded to bomb sites in Iraq and Syria that it said were PKK sites. Turkey was consequently accused by the Kurds and by some US officials of a ‘bait-and-switch’ ploy, using da’ish as bait to fight its old nemesis, the Kurds. Between the US and Russia: Ties with the US have strained considerably since Turkey decided to purchase the Russian S-400 defence system. The US responded by suspending Turkey from the F-35 jet programme. Turkey is now looking at the Russian Su35 and Su-57 planes as possible alternatives.

The Beginning of the End? President Erdogan returned to the leadership of the AKP in 2017 and expected to continue his amazing streak of victories in the 2019 local elections. This time, the AKP lost not only Istanbul, for the first time in 25 years, but also five of Turkey’s six largest cities. The Turkish government ordered a re-election in Istanbul, but the AKP fared even worse in the re-run elections in June. With the economy still struggling, criticisms of authoritarianism, frayed relations with the US, and invincibility at the polls smashed, President Erdogan’s position has never looked weaker.

“There is not moderate or immoderate Islam. Islam is Islam and that’s it.”

“We are followers of a long established tradition which has, throughout history, considered social, cultural and religious differences as richness.”

4 million refugees are hosted by Turkey