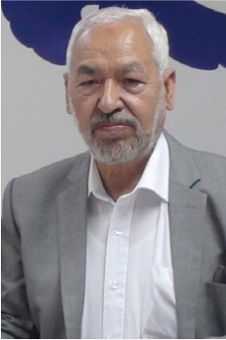 Ghannouchi is one of the world’s leading Islamic thinkers and one of the most influential Tunisian politicians in the post-revolution transition period.

Politics: Ghannouchi co-founded The Ennahda Movement (’Renaissance’) in the 1970s and was imprisoned several times before being forced into exile. The Ennahda is a political party based on Islamic values resembling the Christian Democratic political parties in Europe. It supports the concept of a multi-party democracy. In 2012 he received the Chatham House Prize for “the successful compromises each achieved during Tunisia’s democratic transition” and in 2016 he received the Jamnalal Bajaj Award for “promoting Gandhian values outside India”.

Post Arab Spring: With the fall of President Ben Ali, Ghannouchi returned to Tunisia in January 2011 having spent 20-years in exile. He led the Ennahda (Renaissance) Party to victory in the October 2011 National Constituent Assembly elections. In 2014, Ghannouchi quit government and handed power over to a technocratic government. When elections were held later that year, Ennahda, without Ghannouchi leading them, came second to the Nidaa Tounes party. In 2019 Ghannouchi announced a surprise candidacy for a parliamentary seat in the October 2019 elections. This will be the third set of elections since the 2011 revolution.

Countering terrorism: Ghannouchi has stated that the widespread phenomenon of terrorism in the Arab region is due to corruption in the economic, social and political sectors. He is acutely aware of the bloodshed in neighbouring Algeria and is keen to avoid having only binary options of identity available. He also believes that whoever wants to fight extremism must do so in moderation by following the Tunisian model.