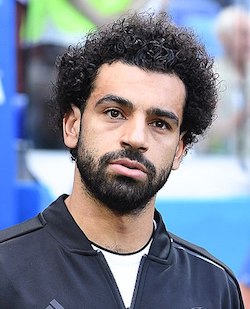 Mohamed Salah is an Egyptian football player of global fame.

International Player: Salah started his career in the Egyptian Premier League in 2010 before moving on to join Basel, in Switzerland. His stellar performances there attracted Chelsea FC and he moved to London in 2014. A disappointing season saw him move on to Italy, where he enjoyed a successful season with Roma in 2016/17. This success prompted another English team to sign him and Salah enjoyed the most successful season of his career with Liverpool FC in 2017/18. He broke many records and won many accolades. He also helped Egypt qualify for the World Cup. The 2018/19 season saw more success with Liverpool FC being runners-up in the English Premier League, and crowned 2019 European Champions and World Club Champions.

Popularity: His affable nature and polite manners have won him many fans across the globe, and none more so than in his native country of Egypt where he has donated to various charitable causes. In the March 2018 Egyptian Presidential elections, over a million people struck out the two names vying for the presidency and inserted Mohamed Salah’s name, making him an unofficial runner up in the election. His down to earth nature has shown itself in chance meetings with fans and acts of kindness towards those in need.