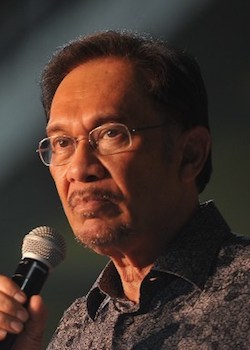 Datuk Seri Ibrahim Anwar was the Deputy Prime Minister of Malaysia from 1993-98 and was then widely expected to succeed Tun Mahathir Muhammad. A falling out between the two led to Anwar being jailed on controversial charges. He spent the following two decades being charged, imprisoned, freed and in-exile. His imprisonment on sodomy charges was condemned as unjust and a travesty by many international leaders and rights organisations.

In 2015, a new opposition coalition named the Pakatan Harapan (Alliance of Hope) was formed with Anwar as the de facto leader. The coalition won the 2018 elections and the chair of the alliance, Mahathir Muhammad became Prime Minister. Mahathir pledged to step down when Anwar was released from prison and ready to take over.

On 16 May 2018, Anwar received a royal pardon from Sultan Muhammad V, and was released from prison. He is now the Prime Minister in waiting and is scheduled to take over when Mahathir Mohammed completes his agreed time.